Medical diagnosis has to be more and more precise and discriminant, especially for certain pathologies close or been similar requiring different therapeutic coverage. Current macroscopic methods based on chromatography techniques coupled to mass spectrometry remain long and tedious. The development of microfluidics bioanalysis becomes thus very important, since fluidic platforms could offer short time to result on volume lower than one microliter, low cost per test, multiplexing on several analytes and portability.

When the diagnosis is based on the separation of several biomarkers, among which the composition and the structure are close, the parameters governing the separation must be perfectly controlled. In this context we are developing innovative fluidic devices for separation of proteins, which can be pathogenic agents or specific biomarkers of disease. The microfluidic separation device called Flow Field Effect transistor (FFET) [Q. Zhang et al, Electrophoresis 38 (2017) 953-976] that integrates polarizable interfaces has been associated to an innovative electronics with voltage followers to tune in real time the speed of analytes in the channel in agreement with the predictive theoretical models [A-M. Haghiri-Gosnet et al, patent FR/5.09.14/ FR1458333-PCT/EP2015/070211]. In the context of two Labex PUCEDIA and FLUTEC projects, both the microstructuration of the CNx polarizable gate and the stacking of the different electrodes have been optimized in order to minimize leakage currents. Dry film based lithography has been also used for producing fluidic devices on soft substrates such as PEN and PET Films. In addition, during the PhD of Q. Zhang, a miniaturized electronic card has been realized with the objective of being stacked on the fluidic chip for getting a fully miniaturized portable system.

In parallel the detection of low abundance analytes in complex samples remains a real challenge. Nanofluidics appears as a very promising route for concentrating toxins, metabolites and proteins in several minutes up to a factor 103. Based on the double theoretical and experimental expertise of our group on the mechanisms of preconcentration in such a nanofluidic device, we have recently proposed a new geometry that integrates series of nanochannels [A-M. Haghiri-Gosnet et al, patent FR/ 9.11.16/ FR1660855]. Coupled with a pressure-assisted preconcentration method, this new nanofluidic chip produces a fluorescence « barcode » as a specific signature of the target biomolecule. In the context of our ANR DIFLUSEL, our experimental results have been selected by the French DGA as one of the best innovations of 2016.

Concerning nanophotonics detection, gold nanostructured substrates have been developed for biomolecular detection and identification using a bimodal instrumentation based on coupled nano-enhanced plasmonic imaging and Raman analysis. This work has been done in the context of the ANR project PIRANEX from 2013 to 2017 with LCF-IOGS, CSPBAT, INL, IAQA academic partners added to HORIBA and SILSEF industrial partners. Our main goal was to demonstrate on one single chip the feasibility of combining Surface Plasmon Resonance Imaging (SPRI) and Surface Enhanced Raman Scattering (SERS) measurements. Thanks to the presence of a Au continuous film under the Au nanodisks, an enhancement of the SERS effect by a factor of 106 to 108 has been demonstrated. This enhancement factor was also shown to be dependent of the thickness of the continuous film and the filling factors. In SPRI the existence of a coupling between the propagating and localized plasmonic modes was observed resulting in a new hybrid mode potentially more sensitive to the surrounding environment due to its high confinement. We collaborate with the SILSEF company for the realization by UVNIL on large surfaces of series of nanostructured samples, since SILSEF is interested by the commercialization of our SERS substrates.

Concerning magnetic detection for high efficient immunoassays, a novel lab-on-chip for ovalbumin detection has been proposed. This microfluidic device integrates microcoils allowing trap and control of magnetic nanoparticles (MNP) during the biofunctionalization steps. In fact, 300nm MNP were successfully blocked and released by monitored microcoils with high precision, enhancing the performances of the immunoassays (quality and specificity of immunocomplex formation). Using this novel device, we have demonstrated a LOD at the picomolar level (<90 pM) for ovalbumin detection [Lefebvre et al., Bio-Sensing Research, 2017, vol. 13, 115-121], which is significantly better than traditional MNP methods without control showing LODs in the nanomolar range. 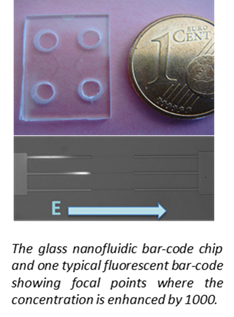 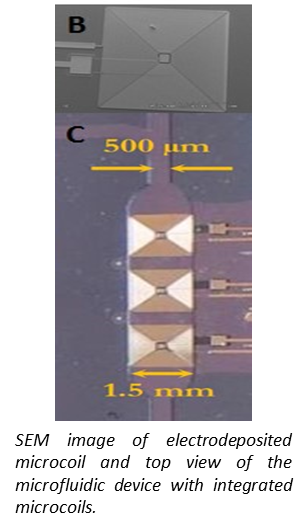